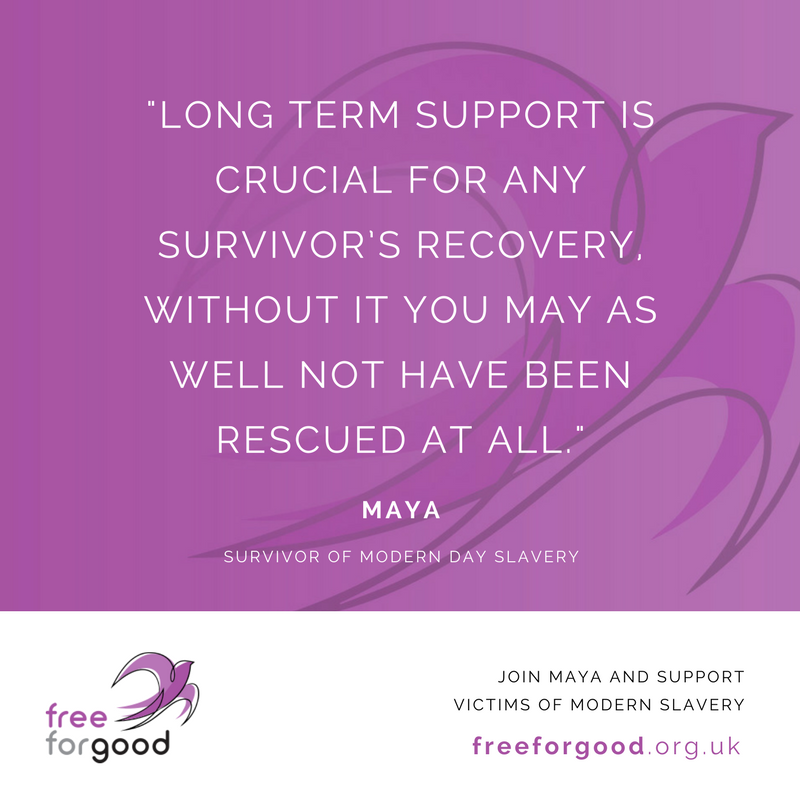 Long term care and support for victims of trafficking is inadequate in the UK but our government could do more. The lack of any safeguarding and protective measures means victims can fall back into exploitation once formally identified by the authorities. How can this be right when the Prime Minister wants the UK to lead the world in tackling this crime? Victims suffer physical and psychological scars which can take years to heal. That’s why Kalayaan offers support tailored to individual need and provides assistance for so long as is needed to enable victims to go on to lead independent and fulfilling lives.

Kalayaan is a member of the Free For Good campaign along with a number of leading anti-trafficking charities and businesses. The campaign backs draft legislation which would enshrine in law the support victims need to move on with their lives and be free for good. The bill – called the Modern Slavery (Victim Support) Bill – started its journey in the House of Lords in 2017. It passed through without challenge. It offers victims who have entered the National Referral Mechanism (NRM) and who have been accepted as trafficked or enslaved time to rebuild their lives. It offers them time to seek counselling, to obtain compensation, to pursue criminal charges and to seek justice against their perpetrators.

The bill calls for leave to remain for 12 months for recognised victims.

The government is concerned that an automatic policy granting leave will incentivise some individuals to make fraudulent claims but this does not take into account the fact potential victims can only be referred by an authorised body (including the Home Office and police) who have been trained to spot signs of exploitation. Unlike other immigration applications or asylum applicants, victims of trafficking have to be referred by a designated first responder to the NRM. There is no risk to the system being abused as any fraudulent claims will be filtered out and ultimately issued a negative decision. There is also provision in the bill for those convicted of sexual or violent crimes to be excluded from being granted leave in the UK.

Some might conflate this as an immigration issue but 12 months is the minimum time that recognised victims of trafficking need to recover and start to move on. Without this time and the guaranteed support the bill offers, victims remain at risk. Kalayaan sees and speaks with victims every day. We see this risk first hand. Currently victims are left destitute and homeless when they exit the NRM and some enter back into exploitation as a means to survive. It’s a systemic issue which affects women, men and children, UK nationals, EEA nationals and third country nationals. The cycle has to be broken.

And it can be, but not without government support. The bill has its second reading in the House of Commons on 23 November 2018 but is currently the 22nd bill to be debated that day. This listing means it will not be reached and will be unlikely to make any further progress.

The time for action is now. The government can no longer say they are providing adequate support when victims are recognised as trafficked but provided with no recognition, support or protection.

Work is underway to reform the NRM but 12 months since the reforms were announced we are left with more questions than answers and still to see any tangible improvements. The reforms do include extending the time given to victims to exit the NRM from 14 days to 45 but this will just postpone the cliff edge that victims face and as noted in a recent Westminster debate, is not a pathway to recovery. This reform is also not due to take effect until early next year.

The government also seeks to rely on the regulations for supporting victims which are still to be produced under section 50 of the Modern Slavery Act 2015. These will not be made public and potentially not up to scrutiny unlike the bill which was drafted in consultation with experts and front line organisations who support victims.

Ultimately the reforms to the NRM do not guarantee the time and support victims need to recover which the bill does. The government must choose to protect victims of trafficking from further harm and abuse. Only then can weclaim to be world leaders in this field.

Kalayaan asks the Prime Minister to commit to debating the bill at second reading and not to let this opportunity pass. Let’s put victims first and give them the time they need to live free for good.

For further information on the bill and how it would address the issues faced by migrant domestic workers, see:

Free For Good briefing for Westminster debate on Modern Slavery

Kalayaan briefing to the House of Lords, Second Reading