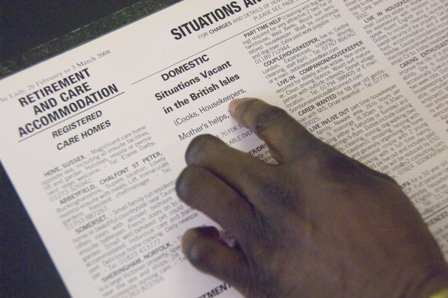 Susi (name and identifying details have been changed) came to the UK from Qatar where she had worked for a little over a year.

Susi had migrated to Qatar because she had no other way to feed her family. She has described how as a single mother it was very hard for her to get work to support her two children and ‘there were many days on which we did not eat’. She is clear that it is up to her to support her two children and she is determined that she will do her best to provide a better future for them than her life. She frequently describes ‘sacrificing’ herself in order to do this.

In Qatar she was employed as a cleaner and a nanny. She worked every day of the week. – every 2 months she would get one day off- from 9am to 5pm. Her hours of work were generally 6am – 11pm or 1am. She had no rest breaks and earned equivalent to £240 a month. She says apart from what she kept so she could call her children she sent her entire salary home, and it was still never enough. She was able to call her children twice a month. She paid for the calls.

After almost a year the employers took her to have her picture taken and to sign some forms. She understood that she was travelling to the UK with her employers. She had no say in this matter and no one asked her if she wanted to go. Susi explained that she didn’t know anything about the visa type on which she entered the UK. Her employer travelled with her to the UK and held her passport all the way, including through immigration control. Once in the UK the employer kept her passport with them in their room.

In London there were two other workers in the house, Susi shared a room which she describes as ‘like a storeroom’ with these other two workers. She was told she was not allowed any calls and had no time off at all in the UK. She was not allowed out, even to go into the garden. The door was locked. If she needed anything from shops outside she had to ask her employer to buy it for her.

After a few months Susi found her passport when she was cleaning. She had also discovered where a spare key to the house was kept. Finding her passport gave her the courage to escape. By the time to Kalayaan she had one ‘friend’ who she described as ‘helping’ her for whom she cleaned and looked after her kids in return for accommodation and the odd £5 or £10. She had no idea how long this arrangement would last for and where she would stay when it ended.

Susi consented to a referral into the Government’s National Referral Mechanism for victims of trafficking (NRM). She received a positive decision as trafficked at both the Reasonable Grounds and Conclusive Grounds Stages. However with her positive Conclusive Grounds decision confirming she was trafficked to the UK she was also told to make arrangements to leave the UK. She is clearly still vulnerable. She maintains that if she returns to the Philippines her children ‘won’t eat’ and that she is prepared to ‘do anything’ to provide for them. It seems clear that her lack of choices will result in her being exploited again or even retrafficked. The UK has identified her as trafficked and then left her to be exploited again.

Had Susi entered the UK a few months earlier, before the tied ODW visa was introduced in 2012, she would have been able to change employers allowing her to work legally as a domestic worker, she would be able to send money home to her children, and visit them for holidays. Renewing her visa every year would allow the authorities to scrutinise her working conditions. She would be rebuilding KALAYAAN case id: 3294

her life and recovering from the traumatic exploitation she experienced while working towards her dream of a better future for her children.